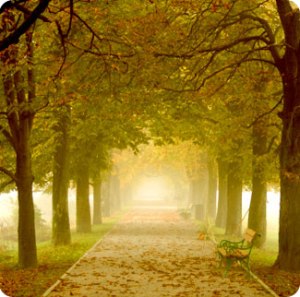 Eight years ago, while studying for the Leaving Certificate in school, I was sitting in an Art History class and I must admit, I was bored out of my mind. I was fed up of learning about Georgian Architecture in Dublin and the Neo-Palladian style of architecture employed by some of the famous architects of the time. I was doing my best to rest my head in my hand without being noticed by the teacher. That particular day, we came to the end of the Georgian section and we were directed to a new section: Architecture cerca 1000 AD. I rolled my eyes and turned to the required page.

It is a memory I still retain, as it was the first time I ever heard of the ‘Camino de Santiago,’ an ancient pilgrimage route that winds its way through France and Northern Spain towards Santiago in the West.  We started reading the historical introduction to this section and I found myself fascinated. As European Civilization approached the year 1000, a shadow of fear and gloom settled upon the lands. Economies and societies fell into disrepair as it was widely believed that the year 1000 would be the end of the world. Jesus would return in glory with his angels to weigh the souls of the living and the dead and send them either to Heaven or to Hell. As a result, nobody saw any point  in maintaining order or continuing with non essential activities.

The year 1000 dawned and the sinners of the time must have breathed a sigh of relief. The world continued as normal. Some people moved on with their lives as before, but others chose to dedicate  time to God in prayer, fasting or even pilgrimage as a form of thanksgiving. They traveled to many places, chief among them Jerusalem, Rome and Santiago, where it is said that the remains of St. James the Apostle are buried. As this became a common thing to do, small communities that started as resting points for pilgrims on their long journeys grew larger over time, eventually leading to the construction of major cathedrals along the way. These cathedrals catered for the swell in the number of pilgrims. People believed that pilgrimage could bring them closer to God.

Nowadays, people still walk the Camino de Santiago. Some do it for religious or spiritual reasons, while others do it for adventure.  Everyone’s reason is different and personal. Traditionally, the Camino started at one’s front door, but you can start where you please in an age of air travel. The most popular route is the ‘Camino Frances.’ This starts in France in a town called St. Jean Pied de Port. However, it is not long until the pilgrim finds him or herself crossing the border into Spain. At that point, there is about 700 km of walking to do to reach Santiago. Several of Spain’s larger cities mark the way, with Pamplona, Burgos and Leon all part of this route. Upon reaching  the cathedral in Santiago, pilgrims receive a ‘Compostela,’ which is a certificate verifying the completion  of the journey for religious purposes. Alternatively, if the traveler has another reason for walking the Camino, such as cultural interest, they receive a certificate of acknowledgement. It is necessary to walk at least the last one hundred kilometers of the Camino to receive a certificate. This achievement can only be proven by presenting one’s passport at the pilgrim’s office in Santiago, which must bear the stamps of all the pilgrim hostels stayed in. These are alternatively called ‘albergues’ and ‘refugios,’ which are specific resting points for pilgrims where they can find bed and food for one night at a lower price. 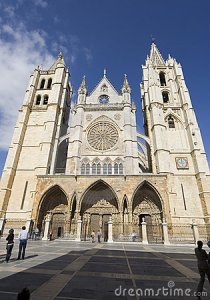 (The Cathedral in Leon, Spain)

I want to walk this path someday. I have no immediate plans to do so, but in the last year, it has become something of a frequent thought for me. Everything seems to remind me of it and people have even brought it up in conversation out of the blue. It is as if the universe is trying to push me towards it. Often in our lives, we put things on the long finger for different reasons, whether they be financial, time or fear related. For me, the Camino potentially represents all of these reasons for not taking the proverbial bull by the horns and deciding to undertake the walk in the very near future.

The Way does not have to be a costly experience, but a minimum of 1500 Euros would surely be required, by my estimation. That’s 37.50 per day, if it takes 40 days. Of course, some people walk it in a month, but other people take longer. And it all depends on how much you want to spend. Do you want more up-market accommodation every so often or are you content with the cheaper pilgrim hostels. And what type of food do you want? Gourmet or a normal meal?

Time is an obvious barrier in committing to undertake the Camino as well. The traveler must be able to leave behind normal life for a significant period. Anyone employed in a steady job is unlikely to be able to get that amount of time off. Likewise, someone self employed probably could not afford to take so much time away from their business.

The ‘fear’ factor, perhaps for want of a better word, can also hold one back. In my case, I find the the prospect of starting the Camino alone unappealing. I would prefer to travel with friends. Apart from the fun and the camaraderie, there is the practical benefit of having good help at hand in case it is needed. However, some people prefer to start alone, even largely go it alone, to afford themselves time for self reflection. Of course, people from all over the world walk this path and my idea would be to make new friends along the way, thus enriching the experience.

There is an excellent film about one pilgrim’s experience of the Camino de Santiago called ‘The Way.’ Directed by and also starring Emilio Estevez, along with his father Martin Sheen, it is a poignant tale of a father’s journey on the Camino after the death of his son, who had been undertaking the pilgrimage. He meets many people on his journey, some of them very colorful personalities and they give us a glimpse of the diversity of people who make this journey to Santiago. 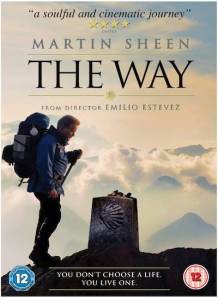 For me, it is this diversity that is most attractive about the prospect of walking the Camino. If I had to put my finger on it, that would be it. It is a reflection of life’s journey, even though to undertake the Camino requires one to step out of their normal life. We start off at one place and then meet, see, talk, do, taste, go, love and hear, plus any number of other actions throughout our lifetimes and all end up ultimately at the same destination. Yet we never know what to expect in the ‘in-between’ stages and this is what is so exciting about life and about the Camino. It is like a work of art in progress.

Now that I’ve mentioned art again, that’s a good point to stop, I think! Just to clarify, I did enjoy Art History in school. Perhaps that day was a fateful one in my life, as who knows how the Camino will unfold for me, please God. Should you find that this article has whetted your interest, well, perhaps we shall see each other at some point along the way. Buen Camino!

(Cathedral of Santiago de Compostela, the ultimate destination of the pilgrimage)