With the dawn of the Fourth Age, Middle Earth has seen a resurgence in it’s tourism industry. Yes, we were all aware of some peculiar conflict going on that involved a ring, and a dark lord and something about the end of the world, but that’s all history now. According to reliable sources, which include members of the White Council, Middle Earth is now a ‘very safe’ place for tourists. With declarations like this coming from such high profile individuals, is it any wonder that the number of tourists arriving at the Grey Havens has tripled since the Fourth Age has been ushered in? I’m told even the last remnants of the Goblins and Orcs of such dark places as the Misty Mountains have ‘simmered down’ and some have even joined reform programmes with the end of being re-integrated into society.

As most of you probably know, Middle Earth is not as technologically advanced as the rest of us, so that’s why they don’t have airports. The only way one can arrive is by ship. These charming vessels are crafted by the Elves of Mirkwood and are of the highest quality, certainly far superior to anything our ship-makers are capable of producing. They are also commandeered by real elves, most of them from Mirkwood but a few hail from other places and there are even men from Laketown.

Upon arriving at the beautiful shores of Middle Earth, there are a host of options for travel. Almost invariably tourists take express horse-carts to the bigger and more populated settlements of Bree or Rivendell as first stops. At last it is now even possible to spend time safely in Isengard without falling down a massive hole in the ground. It has been rebuilt after that business with it’s previous owners. Anyway, while these and the lands beyond like Rohan and Gondor are very popular with the tourists, one of the places that is surprisingly often overlooked is the Shire, home to the Hobbits. Given their apparent recent entanglement in whatever problems Middle Earth was having, one would think that people would be more interested in visiting this land, but it is not the case. One extreme sports seeking tourist, Larry O Shea, had this to say:

‘The Shire? Why would I stop at that place? The only reason I would visit it is if I was hungry or after a wee pint, as the wee lads there always seem to be ‘atin’ and drinkin’. But sure I wouldn’t even be able to fit in the door like, Ian McKellen actually couldn’t even fit in the doors in real life. All his scenes had to be filmed with a green screen because he was too tall to fit in their wee homes with all them other little fellas.’ Cheers, I’m off to go hunting the last few Wargs on the plains of Rohan.’ 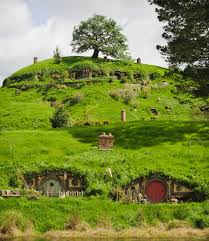 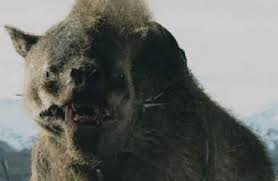 Left: The Shire, where Larry is not stopping. Right: One of the Wargs he is hoping to catch.

Dismissive words to say the least, but this reporter thinks that there may be more to the Hobbits than meets the eye. After all, in the words of the same Mr. McKellen, one can learn all there is to know about Hobbits in a month and yet they can still turn around and surprise you after a hundred years.

So it is that I find myself in the Grey Havens having just arrived from the beyond. I have asked those around for advice on where to go, but I feel drawn to the road less travelled. I make for a stop at the Shire. With any luck, my cart, while not an express cart, shall show my fellow travellers and I the meaning of haste, relative to small horse carts. Tally-ho!  Talk to you soon!

Map from the Grey Havens to the Shire.