(NOTE: ALTHOUGH I TOOK PRIDE IN THIS PIECE, ULTIMATELY, I DISCOVERED MY THESIS IS BASED ON A MISUNDERSTANDING OF HEGEL’S DIALECTIC. IT WILL NEVER REACH A POINT OF CULMINATION, WHICH WAS WHAT I HAD THOUGHT. HOWEVER, I HAVE STILL SUMMARISED THE DIALECTIC WELL IN THE FIRST PART, I THINK. THE SECOND PART, ON TRANSHUMANISM AS THE ANSWER TO HEGEL’S DIALECTIC, IS WRONG. )

I have endeavoured to bring together two ideas here which really may not belong together. This combination really may be crazy, but bare with me.

The first idea is that of Hegel’s ‘Dialectical Process.’ With philosophy, Friedrich Hegel sought to define the world in terms of A’s and B’s, (X’s, Y’s and Z’s are not excluded!, kidding, they kind of are)  or opposing ideas that exist in three stages. These stages are popularly called, from 1st to 3rd, the ‘Thesis,’ ‘Antithesis’ and ‘Synthesis.’ Note that Hegel himself never used these terms.

In the Thesis, idea A exists in relative harmony with itself. Call him Andy. Likewise, idea B exists and we’ll call him Bob. Andy and Bob both have their own specific views of the world which they believe to be the better ones. These views are opponents of one another.

Let us imagine that Andy and Bob are both attracted to the same girl. She is called Jane. Their opposing ‘world’ view in this case is that Jane should be their girlfriend. Ideally, she cannot be the girlfriend of both of them! So, Andy’s view is that Jane becomes his girlfriend. Bob wants her to be his girlfriend. In both their views, the other man is obviously excluded!

As a result, we reach the Antithesis stage. A opposes B. Andy opposes Bob in the desire for spending time with Jane. The two sides are opposite and necessarily exclude the other which leads to conflict. Not necessarily an actual conflict, but opposition of ideas. Nonetheless, the potential for direct conflict is there.

Eventually, they accept that they can’t both go out with her and so both drop the idea, which is a compromise. This stage is the Synthesis, where the ideas A and B come to some sort of agreement. There is still tension but both agree to drop it. Note that this stage is not always reached, as in the above example, one of the men could kill the other in jealous rage! Very violent, I know, but in that case A would nullify B or vice versa, leaving one of them free to synthesise with Jane, if I can perhaps make a slightly risqué joke! Anyway, that would be an antithesis reverting to a thesis rather than becoming a synthesis, if I am correct.

So Andy and Bob, as single men, must go through some other new set of features in this process to achieve their goal of finding a lovely woman each. Another brief and similar example could be the meeting between Andy and Jane’s friend Mary. Both meet (thesis), Mary likes Andy (A) but Andy doesn’t like Mary (B). Over time Mary tries to impress Andy but Andy is uninterested (antithesis). In the end, Mary impresses him and Andy decides he likes her too, so they start going out together (synthesis). But enough of all this romance! Let me show a more serious example.

Take a national political system which is composed of only two parties. These parties both have their own ideals. Again, call them A and B. This is the Thesis. These ideals are opposed as they are different to each other and so the two parties are opposed (antithesis). They argue back and forth and present their views to the voters. Neither can ultimately overcome the other as in different periods one will have more influence than the other. Once this is recognised, the stage of synthesis has arrived. In fact, the two parties can actually help one another. This is so because they can work together to control the issues that are focused on in political debate, thus avoiding the issues they don’t want discussed. As there is no other outlet for political discussion, the public is forced to participate in whatever issues are dictated by these parties. Strangely enough, they call this ‘democracy’ these days. This is the Hegelian Dialectic applied to politics and examples of it can be found around the world. Again, the obvious fact is that, in spite of Hegel’s claim that history shall have a resolution in an ultimate synthesis, this process can go on indefinitely.

But, to my knowledge, Hegel said history would culminate in some sort of secular fashion. Humanity will achieve fulfilment in a purely physical and cosmological sense. I could not get my head around this. ‘How?’ I thought for a long, long time. How could humanity achieve fulfilment in this universe when it is clear from our history that we are never truly fulfilled?  This is clear even now. Just flick on the news. I could not think of any possibility. 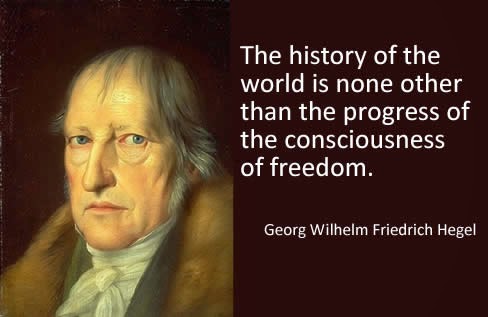 However, I eventually thought of a somewhat novel idea which could possibly act as a resolution. This is the second idea I mentioned in my opening lines. It is called Transhumanism or Posthumanism, if we speak in most perfect terms. Many people have probably heard of this idea, but for anyone reading who has not, proponents of these concepts hold that human beings can be made technologically better. This would occur by improving our bodies and our mental capacities through bio-engineering or even by making the body unnecessary for our natural existence, thus freeing us from biological needs and desires. It would even theoretically make us physically immortal! The idea of the elimination of the necessity of the body would be probably too simply explained as an ‘uploading’ of our minds to some system, but I believe that is the basic idea. It was explored in the film ‘Transcendence’ with Johnny Depp.

Now, I have always been interested in science fiction and fantasy literature. I love the video game series ‘Halo,’ for example. This is another example of pop-culture wherein the protagonists are biotechnologically augmented. The ‘Spartan II’s’, as they are called, have metal grafted to their bones, enhanced eyesight, greater strength and faster reflexes, not to mention above average intellectual capacities, all (largely) as a result of a complex combination of military training and very expensive bio-engineering. Not to mention their armour, which functions as a kind of second skin. Although these soldiers are at first ‘created’ in small numbers, eventually this technology is able to be applied to more and more people at less expense. They don’t have to have any remarkable natural qualities either, as the original subjects did. 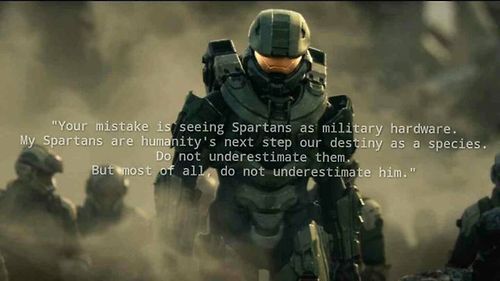 So, can this idea of technological bio-fortification be thought of as something seriously possible? Honestly, I don’t know, so I’m not going to waste your time discussing that. However, the idea that our bodies could be improved again and again, to the point where we eventually don’t have organic bodies but artificial ones (like the Promethean Knights of Halo, to use that example again) is a way in which, in many people’s dreams, the human being could ultimately be fulfilled. It would seem artificial bodies, which were home to our minds, would make us potentially immortal, once the hardware involved had access to a continued power source. With no biological necessities or strong desires to distract us, we could focus totally on the harvesting of all the knowledge there is in this universe. We could explore the cosmos with greater ease as our artificial bodies would be less susceptible to deterioration. We would be unfeeling and totally rational, it would seem. Human beings, as we know them, would have changed as it could be said our species had reached it’s highest possible level of physical being. These beings would be ‘Posthumans.’ 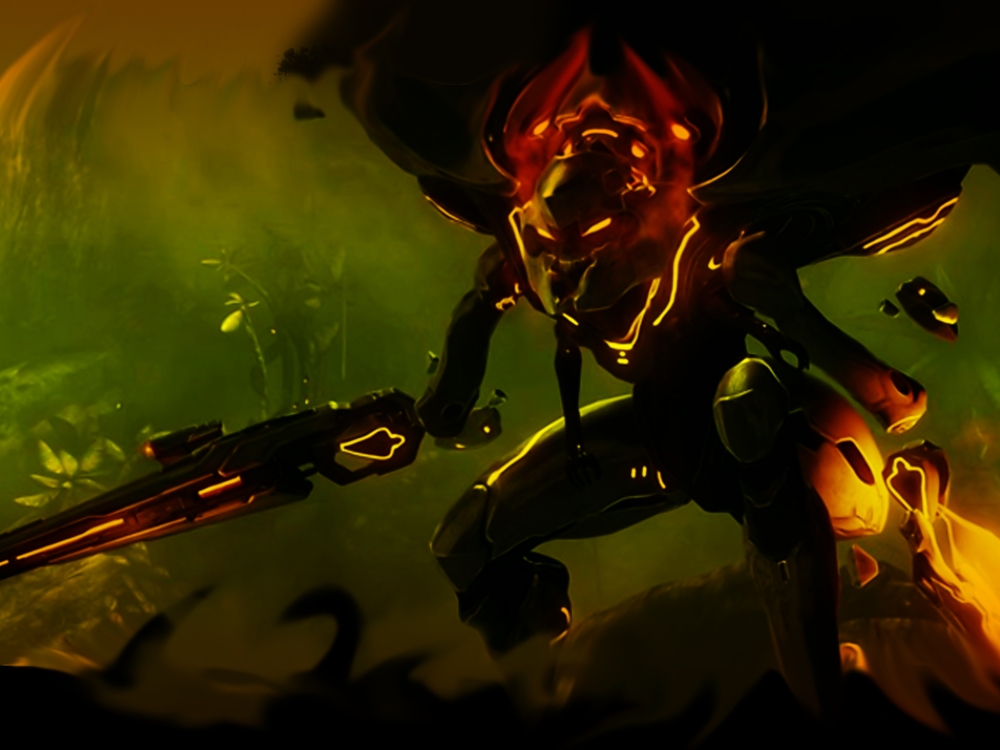 The pretty mean looking ‘Promethean Knight.’ Sentient with an obviously artificial body. Their consciousness is actually that of a once organic individual.

This brings me back to the juxtaposition of Hegel’s Dialectic and Posthumanism. Now it should be asked if human beings, having achieved this physical transcendence, would be fulfilled? The answer I will give is no. For, despite the potential capacity we would have to eventually learn all there is to know about our cosmos, presumably, we would eventually know all there is to know. And then what? A being with this amount of knowledge would no longer have any purpose. One could suggest it could ‘teach’ it’s fellow beings, but surely this would amount to instantaneously sharing data through a network that would again render it purposeless. A ‘post-human’ would be a seemingly self sufficient (apart from energy) synthesis of all the knowledge there is, but it would no longer have any purpose. It could not feel bored or sad, but it would not be fulfilled in the sense of purpose as it would suddenly no longer have any at all. With no new information, perhaps the mind would stagnate and become insane. So, to answer my own question again, it would seem Transhumanism would not ultimately answer our search for fulfilment or satisfaction and thus Hegel’s Dialectic would not achieve ultimate synthesis either.

For many people, purpose is relative. The Catholic Church says human purpose is objectively defined by God. This purpose is to know, to love and to serve Him in this life and thus come to Him in paradise. After this long and peculiar discussion, that is the point I want to make: I do not think we can honestly achieve any resolution in this universe that will ultimately fulfil us as human beings. As St. Augustine said, ‘Our hearts are restless until they rest in You, O God.’

Thanks for reading. I hope it has not been too strange a reading experience! After all, one does not often find Hegelian philosophy, Transhumanism and Christianity all mixed up together.